Since when in 1851 the first America’s Cup has been sailed, the competing ships and boats are continuously developed and optimized. In 1937 the first ship with a mast from duralumin participated. About fifty years later the first ship with a wing keel won in 1983. In the late 80ies the first 12 m boat with a hull from fiberglass participated in the race. 2007 there are first boats with a hull and rig from carbon fiber reinforced plastic, which have a tremendous weight advantage and at the same time a very high strength and durability. Three years later USA 17 wins the America’s Cup, a trimaran from carbon fiber, propelled by a gigantic wing sail. Three more years later catamarans with foils, comparable to underwater wings which lift the boats out of the water, come into use. In 2015 the technologies foils and wing sail are combined on catamarans and enormous speeds are achieved. Two years later further developments of these catamarans accelerate up to a maximum speed of 100 km/h. (Source: BMW Yachtsport) 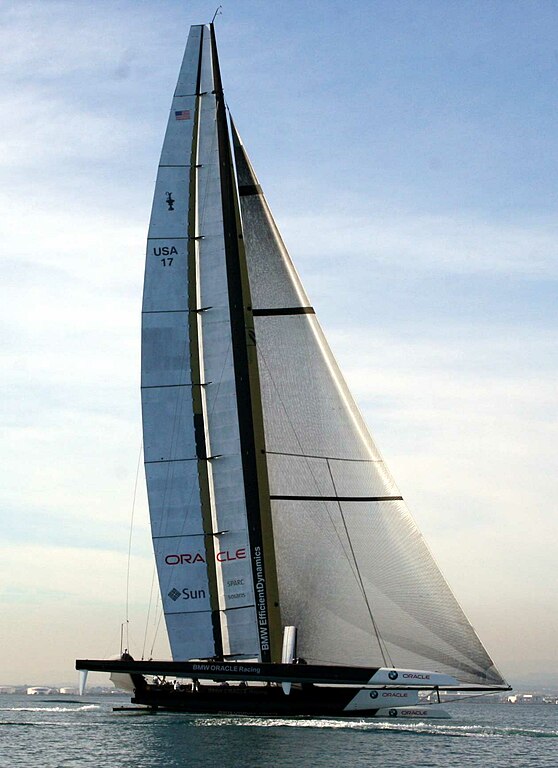 The USA 17 has almost entirely been built from carbon fiber. She is 34 m long and 27 m wide. By using carbon fiber, she is very light and withstands the loads and stresses of a sailing regatta. The carbon fiber trimaran is propelled by a wing main sail with 630 m² sail surface, a conventional headsail with 620 m² and a gennaker with 780 m² sail surface. The wing main sail has a height of 68 m, a depth of 3-14 m and a width of 0,5-2 m. It weighs 3,5 t and consists of two components shown in the sketch below. One is the flap element, and the other is the main element. The main element is of one piece and is rotatable around the mast. The rear part of the wing consists of nine singularly trimmable flaps. They allow a much more exact sailing trim than conventional sails. The wing is made of carbon fiber, Kevlar, and a special film mainly used in aeronautical applications. The flow of air around the wing creates pressure and draught, as it does on the wing of an airplane, and generates propulsion which is up to three times higher than with normal sails. (Source: BMW OracleRacing)

In the America’s Cup 2021, twin-skin-mainsails, double sheeted main sails filled with air have been used on monohull boats, which promise even more weight savings.